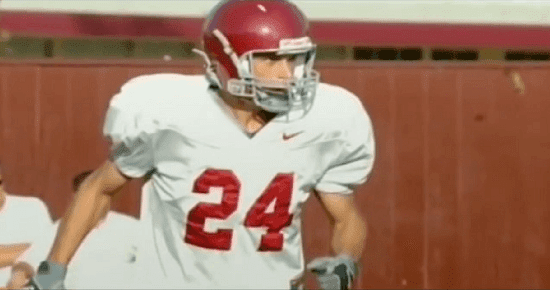 Have you ever done good works for the Lord without seeing any positive effects from your efforts? Keep doing them anyway because you may not know what effect they've had on someone for years and maybe not even until you get to heaven. Ben's inspiring story illustrates this well.

As a student, Ben Malcomson covered the USC football team as a journalist for three years. He then decided that it would be interesting to write about the experience of trying out for a college team, So he started running and getting in shape and walked onto the field, never expecting or wanting to actually make the #1 rated football team. He was shocked when he heard the news. "You can run fast and catch the ball, I want you on the team," Coach Pete Carroll said.

As a Christian with great love for the Lord he decided to share his faith in Christ with his fellow players, but to no noticeable effect. At least to no effect that he could see. He was crushed when a fellow player and close friend died and Ben hadn't shared the gospel with him yet.  Ben's story and what he learned four years later will inspire you!

Here's the full-length story that he shared at City Church in March 2015.
Testimony