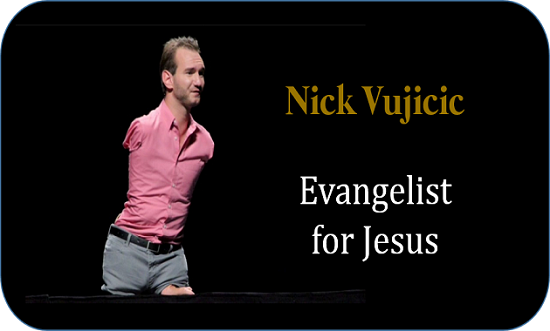 It was a great honor to see Nick preach. His story is simply amazing and his testimony is powerful, like nothing I’ve seen since the Billy Graham crusades.

As you can imagine, making your way through this life is hard enough without disabilities, but to live without arms legs is a mind-boggling feat. Unfortunately, for Nick, he also had to endure bullies growing up who often told him that he should just give up. This led to depression and Nick asking God, why me?

So, what was the spark that changed Nick from a depressed boy into a powerful evangelist who has shared God’s Word with 6 million people worldwide and has led 600,000 of them to make a decision to follow Christ? The man who has prayed for 400 people to receive a miracle and has seen 13 of them happen?

The spark in Nick’s life came from Holy Bible. He was reading John chapter 9 which tells the story of a man who was born blind. Never had a man who was born blind ever been healed of his blindness but Jesus healed had him. And not only that but that man who was once blind had become a powerful witness to the Jewish leaders. Nick realized that he was born this way for a purpose.