Parable of the soils 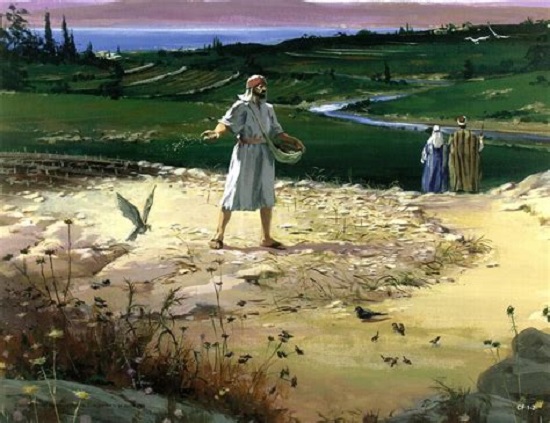 The parable of the soils, also known as the parable of the sower, was a real blessing to me because it helped me to understand why people respond (or fail to respond) the way they do to the God’s word, and particularly to the gospel of Jesus Christ.

Before I understood this parable, it was easy to get discouraged when I didn't get the response I'd hoped for when sharing God's word. My frustration was a result of not considering the various conditions that a person’s heart might be in at any given time.

Of course, it’s also helpful to understand that we can't convert or save anyone when we share the gospel. We can only plant the perfect seed of the good news of Jesus Christ, and then if they’re willing, we can water that seed with the faithful teaching of God’s word. It's the work of the Holy Spirit that determines if a person who hears the gospel will be saved. This is why I like to pray for the people I'm witnessing to that, God will prepare their heart to receive the gospel and believe it in their heart so they can be saved.

Jesus’ parable of the soils is found in three of the four gospels: Matthew chapter 13, Mark chapter 4, and Luke chapter 8.


On the same day Jesus went out of the house and sat by the sea. And great multitudes were gathered together to Him, so that He got into a boat and sat; and the whole multitude stood on the shore.
Then He spoke many things to them in parables, saying: “Behold, a sower went out to sow. And as he sowed, some seed fell by the wayside; and the birds came and devoured them. Some fell on stony places, where they did not have much earth; and they immediately sprang up because they had no depth of earth. But when the sun was up they were scorched, and because they had no root they withered away. And some fell among thorns, and the thorns sprang up and choked them. But others fell on good ground and yielded a crop: some a hundredfold, some sixty, some thirty. He who has ears to hear, let him hear!”
Matthew 13:1-9 (NKJV)

Of course, as Dr. Ron Rhodes likes to say, “A parable unexplained is just a riddle”. Praise God, we don’t have to guess the meaning of the parable because Jesus explains it to us.

Notice that Jesus says nothing about the sower in this parable. That’s because the condition of the sower is not what’s important. Every Christian is expected to sow the good seed of the gospel. It doesn’t matter if you’re elegant in speech, good-looking, or stylish. The parable also doesn’t mention the condition of the seed. It’s assumed that the sower is sowing the word of God and not a false gospel because a false gospel results in false salvation.

The focus of this parable is about the condition of the soil, which refers to the condition of a person’s heart because this is where the problem lies. The types of soil mentioned in this parable would have been well understood by the agrarian culture of the day. But for those of us who have never worked in agriculture, we might miss some of its meaning. So, let’s take a closer look at the four types of soil and how they parallel the different conditions of the heart.

Soil by the wayside
Some translations refer to this soil as “beside the road” or “along the path” and so on. It refers to the walking paths that border a field. In first-century Israel, farmers would usually make a walking path around their fields instead of building fences. As you might expect, the soil on the path would get packed down from the people who walked along the path. When the sower would cast the seed, some of it would fall on this soil and because the seed doesn’t penetrate the hard soil, its snatched away by the birds.

Likewise, a gospel doesn’t penetrate a hardened heart. People harden their hearts towards God for various reasons, but I think the number one reason is that they want to be their own God. They want to live life their way, and so they reject the gospel message, or as the bible refers to it, the devil comes and takes the message away, just like the birds of the field take away the seed that falls on the hard ground.

The Pharisees of Jesus’ day are perfect examples of this kind of hardened heart. They knew the scriptures and the prophecies of Isaiah which revealed Jesus as their long-awaited Messiah but they rejected Him anyway. We’re not told exactly why the Pharisees rejected Jesus but we can infer that they had hardened their hearts toward Him because they were expecting a lion and not a lamb.

Stony soil
Any good farmer removes stones from his field before casting the seed. The rocky soil in this parable isn’t referring to rocks on the surface of the ground but rather it’s referring to the bedrock that lies just below the surface. This would have been very familiar to the people of Israel because their land has much bedrock near the surface of the ground, which can’t be removed. When the seed is cast on this rocky soil, the plants spring up quickly because the roots can't grow deep. When farmers see plants that spring up quickly, they know they’ll soon wither from the heat of the sun because the roots can’t grow deep enough to reach the water.

Likewise, there are people who receive the gospel with great joy. They might even cry crocodile tears when receiving the good news. The problem is, they believe for a while but fall away from the faith as soon as temptation comes. Why? Because they have no firm root; their faith was superficial because they are self-centered people. This is like the disciples who turned away from Jesus when they rejected His teaching in John 6:51. While the real believers stayed with Jesus, those who fell away were never converted because they failed to repent. They failed the test because they didn't hate their own sin. 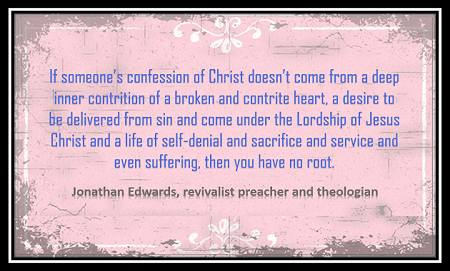 Believers who receive the gospel with joy and then turn away from the faith is perplexing to many Christians. But now that you understand this parable, you know why this sometimes happens. We need to understand that an emotional and even joyful response to the gospel is not a positive sign of salvation. In fact, receiving the gospel with a feeling of brokenness, sadness, and remorse for the way they've lived is a more positive sign that their salvation is genuine. Perhaps this is why Jesus said “Blessed are those who mourn, for they shall be comforted” (Matthew 5:4).

Thorny soil
Thorny weeds were commonplace in Israel during Jesus’ day. My favorite definition of a weed is a plant you don’t want. This is because weeds tend to be more robust than the good plants. They compete with the good seed for the nutrients and the water in the soil and they tend to overshadow and choke out the good seed.

Likewise, there are people who believe the gospel but the word of God is choked out because of the cares of the world. Their desire for the riches and pleasures of this life outweigh their desire for God. They're more likely to be drawn to the false prosperity gospel than to the true gospel. They bring no fruit to maturity and therefore were never really saved because genuine believers always bear good fruit.

Good soil
It goes without saying that good seed planted in good soil produces the best harvest. The good soil in this parable refers to people who believe the gospel in their heart and they become a new creation. The Holy Spirit comes into them and changes them. These believers never fall away from the faith and they always bear good fruit.

Like many of Jesus’ parables, this one also includes a wow factor, which is the incredible 30, 60, and 100-fold increase mentioned in verse 23. This would have stunned the disciples because an increase of 7-fold would have been a good yield, but a 30, 60, or 100-fold increase would require a miracle.

If you find that your heart is like the bad soil, cry out to the Lord to plow your hardened heart! If you witness to someone with a heart in this condition, pray that God will prepare their heart to receive the gospel so that they can be saved.
- May 03, 2018

Email ThisBlogThis!Share to TwitterShare to FacebookShare to Pinterest
Labels: Parable