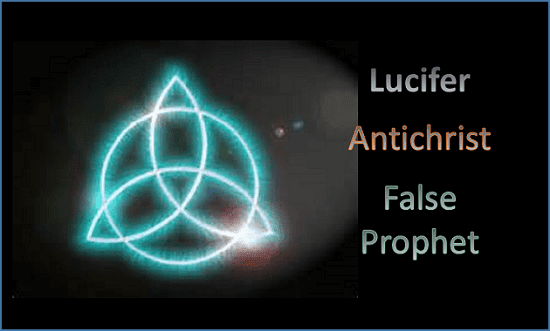 Lucifer (Satan) loves to mimic God. The prophet Isaiah wrote about how Satan wants to be like the most-high God.


How you are fallen from heaven,
O Lucifer, son of the morning!
How you are cut down to the ground,
You who weakened the nations!
For you have said in your heart:
‘I will ascend into heaven,
I will exalt my throne above the stars of God;
I will also sit on the mount of the congregation
On the farthest sides of the north;
I will ascend above the heights of the clouds,
I will be like the Most High.’
Isaiah 14:12-14

Jesus had some scathing words to say about Lucifer.


…He was a murderer from the beginning, and does not stand in the truth because there is no truth in him. Whenever he speaks a lie, he speaks from his own nature, for he is a liar and the father of lies.
John 8:44 (ESV)

The holy vs the unholy trinity

Christians refer to God the Father, Jesus the Son, and the Holy Spirit as the Trinity.  This holy trinity existed since before the earth and the universe was created (Genesis 1:26).

Because Satan wants to be like God, he will form his own trinity during the seven-year tribulation. Satan’s unholy trinity will be comprised of:

It will be of the utmost importance for the people who are on the earth during the seven-year tribulation to be able to identify the Antichrist and the false prophet.