The Bandage and the Bible 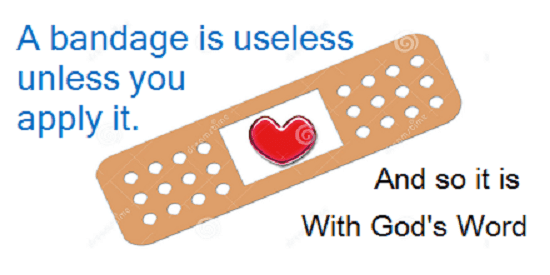 With my finger throbbing in pain, I washed it out as best I could… mostly by pouring some rubbing alcohol over it… Ouch! Then I called for someone to bring me a bandage. Being a repair shop full of men with little compassion for one another, I was, of course, expected to apply the bandage myself.

Since it was the index finger on my dominant hand that was cut, my right hand was basically useless in terms of applying the bandage to the wound. Just getting the bandage out of its sterile wrapper, with one good hand was a chore in itself. But I also to apply it to my wounded finger.

What if I had just given up? I’ve seen people give up in a situation like this, more than once.

This scenario is much like hearing God’s Word and failing to apply it to our lives. How many of us hear a sermon that convicts us of something wrong in our lives but then we don’t apply what we learned to our lives? I know I’ve been guilty of this so many times in the past. I’ll bet most of us have.

Let’s see what scripture says about this…

Writing to the church in Rome, the Apostle Paul warned that only those who apply the Word of God to their lives are justified in God’s sight. In other words, only the believers who obey God’s Word are right with God.


For it is not those who hear the law who are righteous in God’s sight, but it is those who obey the law who will be declared righteous.
Romans 2:13 (NIV)

In one of his letters to Timothy, the Apostle Paul implores him to keep a close eye on his own godly life and persist in faithfully preaching of the Word. This is great advice for anyone who shares God’s Word with others.


Take heed to yourself and to the doctrine. Continue in them, for in doing this you will save both yourself and those who hear you.
1 Timothy 4:16 (NKJV)

And finally, James, the oldest half-brother of Jesus, writing to the Jews who were dispersed after Stephen’s martyrdom warns that professing Christians who are content with only hearing the Word have made a serious spiritual miscalculation.


But be doers of the word, and not hearers only, deceiving yourselves.
James 1:22 (NKJV)

As you can see, failing to apply the Word of God to our lives can have devastating consequences. The good news is, we’re not left to our own devices. If we prayerfully read God’s Word and take heed when the Holy Spirit convicts us of something in our life that needs to change, we can grow more and more obedient to God’s laws.

If you know that there’s something in your life that’s not in obedience to God’s Word, ask Him for help. Ask him for the strength and the will to overcome it. Seek help from Godly people. Just don’t give up. We are all working out our salvation! (Philippians 2:12)