The Rapture and the Second Coming 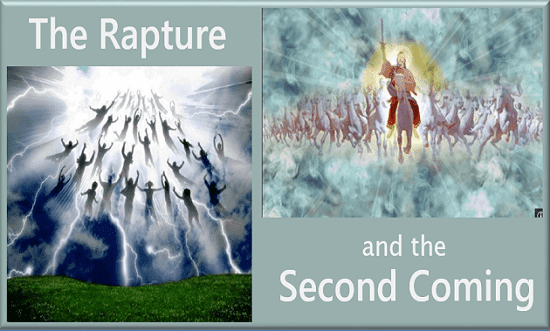 Many people don’t realize that the rapture of the church and Christ’s second coming to the earth are two separate events. There’s some disagreement amongst Bible scholars as to when the rapture will occur in relation to the seven-year tribulation. In fact, there are whole books that are dedicated to the subject so I won’t address that here. But there’s no disagreement as to when Christ’s second coming will occur. It will happen right at the very end of the seven-year tribulation.

Many people today who profess to be Christians don’t believe that there will be a rapture of the Church. Satan must hate the rapture because it’s one miracle he can’t duplicate. Also because he knows that once Christians are raptured and Jesus takes them to heaven, they will be outside of his satanic reach. He will no longer have an opportunity to deceive them and attempt to turn them away from God.

The devil doesn’t want us to believe that the rapture will happen. But the Bible tells us it will happen.

Some people who have rejected Christ try their best to deceive us and in some cases, they’ve succeeded. They do this by saying that the rapture is not mentioned in the Bible. This is only a partial truth. Satan loves to mix just enough truth with his lies to deceive those who don’t study the scriptures. It’s true that the word rapture doesn’t appear anywhere in the Bible. Rapture is simply a word that Christians use to describe this blessed event.

But why would Christians use a word that’s not in the Bible to describe such an important event? It's because the word perfectly describes how Christians will feel when this event occurs. Here's how the dictionary defines the word:
It seems reasonable to me that being transported to heaven would cause anyone to feel ecstasy. So all three of these definitions apply to this discussion. But where’s the rapture mentioned in the Bible? Let’s see what the Bible says.

Jesus warns us to be ready because we don’t know the day or the hour that Jesus will come for us.


Then two men will be in the field: one will be taken and the other left. Two women will be grinding at the mill: one will be taken and the other left. Watch therefore, for you do not know what [a]hour your Lord is coming. But know this, that if the master of the house had known what hour the thief would come, he would have watched and not allowed his house to be broken into.  Therefore you also be ready, for the Son of Man is coming at an hour you do not expect.
Matthew 24:40-44

How will Christians be raptured? The book of Thessalonians provides the answer.


For the Lord Himself will descend from heaven with a shout, with the voice of an archangel, and with the trumpet of God. And the dead in Christ will rise first. Then we who are alive and remain shall be caught up together with them in the clouds to meet the Lord in the air. And thus we shall always be with the Lord.
1 Thessalonians 4:16-17

In verse 16, we see that the Lord himself will descend from heaven and with a loud voice and a trumpet call, raise the dead in Christ. These are the people who have accepted Jesus Christ as their Lord and Savior before they died.

In verse 17, we learn that those of us who are alive and left will be caught up together to meet the Lord in the air. These are the people who have accepted Jesus Christ as their Lord and Savior and are still alive at the rapture. Verse 17 also tells us that we’ll be with the Lord forever. I know that many Christians eagerly await this moment and believe that there’s a very good chance that they’ll be alive to see it because we are on the very cusp of the tribulation.

The disappearance of Christians during this event won’t take long, either:


Behold, I tell you a mystery: We shall not all sleep, but we shall all be changed— in a moment, in the twinkling of an eye, at the last trumpet. For the trumpet will sound, and the dead will be raised incorruptible, and we shall be changed.
1 Corinthians 15:51-52

Sadly, many people today who call themselves Christians don’t even believe in the rapture of the church. Even some of them who do believe in the rapture are not living in obedience to God’s Word. In Matthew 25:1-13, Jesus uses a parable to warn us against being like the unwise virgins who weren’t ready when the bridegroom came for them.

In this parable, Jesus is portrayed as the bridegroom and the virgins are the Christians that he will return for and take back to heaven with him during the rapture. Some were ready when he came for them. Some were not, and were not taken.

For those of us who are ready when He comes, the apostle John records where Jesus said he would take us.


Let not your hearts be troubled. Believe in God; believe also in me. In my Father's house are many rooms. If it were not so, would I have told you that I go to prepare a place for you? And if I go and prepare a place for you, I will come again and will take you to myself, that where I am you may be also.
John 14:1-3 (ESV)

If the rapture hasn’t happened by the time you read this, I hope this will motivate you to get right with God so that you’re ready when Jesus comes for His church. The unthinkable alternative is to miss the rapture and have to experience the wrath to come during the tribulation period.


Watch therefore, for you know neither the day nor the hour in which the Son of Man is coming.
Matthew 25:13

How will you know if the rapture has occurred?

Movies and books have depicted the rapture as people disappearing usually leaving a pile of clothing behind. They show cars crashing and un-piloted planes falling out of the sky, and trains running off the rails. Some movies have even shown that there will be a great lightning storm and people seen ascending skyward in beams of light, one after the other.

But is this how it will really happen?

The Bible doesn’t say what will happen to our clothes and it doesn’t say anything about being carried upwards in a light beam or even if our bodies will be seen moving skyward. What it does tell us is that this will be a one-time event that will happen quickly (in the twinkling of an eye) and at a day and time that no one knows but God the father himself, and that those who are ready for the event (the true Christians) will be taken.


But concerning that day or that hour, no one knows, not even the angels in heaven, nor the Son, but only the Father.
Mark 13:32

It’s likely that millions or at least hundreds of thousands of people will suddenly disappear from the earth. I don’t know if graves will be opened to reveal the absence of the bodies of the saints that will be taken but that could happen if Jesus so chooses.

What if you miss the rapture?

Don’t believe the Hollywood folklore. There won’t be a second rapture and you can’t earn your way into heaven by doing good deeds. You never could. There will be three types of people who will be left behind at the rapture:


Not everyone who says to Me, ‘Lord, Lord,’ shall enter the kingdom of heaven, but he who does the will of My Father in heaven.
Matthew 7:21

If you miss the rapture, you’ll have to endure the wrath that Satan and God will pour out during the tribulation. The last half of the tribulation will be the worst time the earth has ever seen or will see. Billions of people will die during this time, a carnage that has never been seen since the creation of the earth. Odds of surviving the entire seven years of the tribulation isn’t in your favor, either. The only safe place to be is in Christ Jesus. Here’s how:

Jesus’ return to the earth, known as the second coming will happen right at the very end of the seven-year tribulation.

Many have claimed to be the second coming of Jesus Christ and many of them are with us today. But they are all false Christs. We can be certain that they’re not who they claim to be because the Bible tells us clearly that Jesus will return visibly the same way he left.


And when he had said these things, as they were looking on, he was lifted up, and a cloud took him out of their sight. And while they were gazing into heaven as he went, behold, two men stood by them in white robes, and said, “Men of Galilee, why do you stand looking into heaven? This Jesus, who was taken up from you into heaven, will come in the same way as you saw him go into heaven.
Acts 1:9-11

The Bible also says that and every eye will see him return. This is a key point because no one who has ever claimed to be Jesus can make this claim.


Behold, he is coming with the clouds, and every eye will see him, even those who pierced him, and all tribes of the earth will wail on account of him. Even so. Amen.
Revelation 1:7

While being interrogated by Caiaphas, the chief priest of Israel, Jesus acknowledged himself as the Son of God and spoke of his return.


But Jesus remained silent. And the high priest said to him, “I adjure you by the living God, tell us if you are the Christ, the Son of God.” Jesus said to him, “You have said so. But I tell you, from now on you will see the Son of Man seated at the right hand of Power and coming on the clouds of heaven.”
Matthew 26:63-64

Jesus will return with great glory and pour out His wrath.


For the Son of Man is going to come with his angels in the glory of his Father, and then he will repay each person according to what he has done.
Matthew 16:27

Revelation 19:11-21 tells us that Jesus will leave heaven on a white horse and he will be followed by the armies of heaven. He will put down the nations and rule the world with a rod of iron. He will slay the kings of the earth and their armies that prepared to make war against Him. He will capture both the antichrist, (also known as the beast) and the false prophet and cast them both into the lake of fire (hell).

Matthew 25:31-46 tells us that Jesus will sit on a glorious throne, judge and condemn the wicked and reward the righteous. And finally, Revelation 20:1-2 tells us that Christ will bind Satan for one thousand years so he won’t be able to deceive anyone.

Oh, what a glorious day it will be when Jesus finally eradicates evil from the world. I’ve read to the end of the book and it says God wins!

Since this has been a lot of information to take in, let’s take a quick look at how the rapture and the second coming compare.

Email ThisBlogThis!Share to TwitterShare to FacebookShare to Pinterest
Labels: Prophecy