The Destruction of Damascus 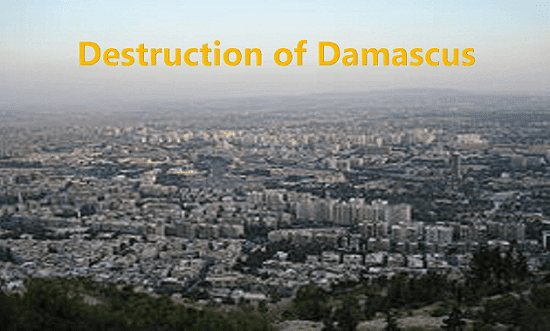 First settled in the second millennium BC, Damascus is one of the oldest continuously inhabited cities in the world. It is the capital city of Syria and has an estimated population of 1,7111,00 people. This city is only 218 km or 135 miles from Jerusalem.

Damascus has never been totally destroyed, yet Isaiah prophesied that the city will be completely destroyed in the future.


(v1) “See, Damascus will no longer be a city but will become a heap of ruins.
(v2) The cities of Aroer will be deserted and left to flocks, which will lie down, with no one to make them afraid.
(v3) The fortified city will disappear from Ephraim, and royal power from Damascus; the remnant of Aram will be like the glory of the Israelites,” declares the Lord Almighty.
(v4) “In that day the glory of Jacob will fade; the fat of his body will waste away.
Isaiah 17:1-4 (NIV)

The fact that Damascus will become a heap of ruins and will no longer be inhabited makes this sound like the most likely cause is a nuclear attack. Verse 4 tells us that the glory of Jacob (Israel) will fade and waste away. This indicates that Syria has probably hit Israel with some type of weapon of mass destruction which is the only way the world powers would tolerate such a retaliation from Israel.

Here’s more evidence that Damascus is destroyed by Israel.


In the evening, sudden terror!
Before the morning, they are gone!
This is the portion of those who loot us,
the lot of those who plunder us.
Isaiah 17:14 (NIV)

The “us” in this verse refers to Israel, which makes it sound like Israel will be the one who destroys Damascus. Friends, when you see the destruction of Damascus, consider it a clear sign that you’re living in the final years of the end times.