The importance of forgiving others 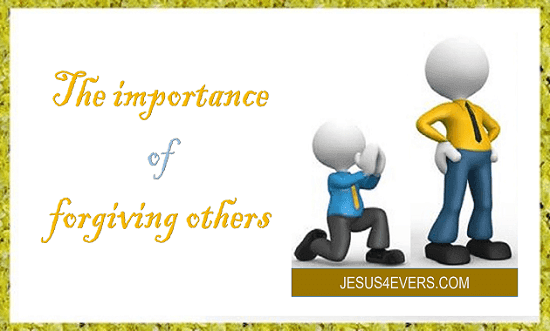 As Christians, we understand the importance of asking God to forgive our trespasses. At least I hope we do. But did you know that if you want God’s forgiveness, you also need to forgive others of their trespasses against you? I know that this is much easier said than done but keep in mind that it’s not optional. Scripture makes it clear that it’s mandatory.

Forgiving others is of such great importance that Jesus mentioned it in what we call the Lord’s prayer.


And forgive us our sins, For we also forgive everyone who is indebted to us. And do not lead us into temptation, But deliver us from the evil one.
Luke 11:4 (NKJV)

When the Jesus’ disciple asked how many times we are expected to forgive others, I’m sure that he was surprised by the answer.


Then Peter came to Him and said, “Lord, how often shall my brother sin against me, and I forgive him? Up to seven times?” Jesus said to him, “I do not say to you, up to seven times, but up to seventy times seven".
Matthew 18:21-22 (NKJV)

Now that’s a lot of forgiveness!

When I was a child, my stepfather treated me so badly that many times his behavior was criminal. The mental abuse was bad enough to live with but if the authorities had known about the physical abuse that he dished out regularly, he would have spent time behind bars. My sister has told me many times that she doesn’t know how I survived my childhood. As I reflect back on my life, I’m convinced that God kept me alive through several near-death experiences because he had a plan for my life.

Later in life, I began to understand that my hatred towards my stepfather was taking an emotional and even a physical toll on me. I learned that the bible is clear that we’re expected to forgive others, so I decided to forgive him.

Why I’m sharing this story with you

I didn’t tell you this story because I wanted to vent. I don’t need to vent because I’ve been over this for years. I told you my story to make a point, which is this. Not only can holding a grudge against someone keep us from receiving God’s forgiveness but it can also take an emotional and physical toll on us. The emotional stress that occurs when we remain angry for long periods of time affects our biology as well as affecting us mentally.

Believe me when I tell you that it wasn’t easy for me to forgive him. I had to go to God in earnest prayer (multiple times) and ask Him to give me the strength to forgive him. And I’m so glad that I did.

God’s ways are higher than our ways

When we live according to our sinful nature, we tend to hold on to our grudges, regardless of whether the trespasses against us are great (such as he stole my car) or trivial like she didn’t pay back the small amount of pocket money I loaned her. Some people have held onto grudges for so long they’ve forgotten what they were mad about.

If you’re withholding forgiveness from anyone, no matter how small or great their wrongdoing against you was, or how much they’ve hurt you, I pray that you’ll forgive them today so that you can heal and so that your heavenly Father can forgive you.

May God bless you as you travel along the glorious path He has set before you,
Daniel
- June 02, 2018