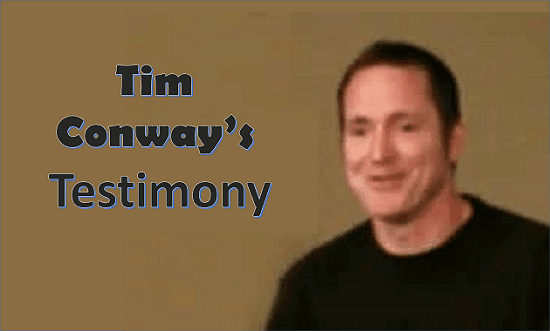 I highly respect Pastor Tim Conway for teaching the Bible faithfully, even the parts that are uncomfortable for us to hear but are necessary for our salvation. His testimony reminds me of Billy Crone’s story. Both men prove that God can use anyone, no matter what they’ve done in their past, as long as they’re willing to surrender their lives to Him and be obedient to His will for their lives.

Tim Conway grew up in a Catholic family but only went to church, maybe five times in his whole life. In his own words, Tim says “I lived the beer commercial kind of life”. He lived for fun and pleasure and was willing to try anything that led to that. As far back as high school, Tim drank heavily and regularly took drugs. He knew this lifestyle wasn’t sustainable, so he convinced himself that he’d quit when he got to college. But when he got there, it only got worse.

By the time he graduated with an engineering degree, Tim realized he was never going to quit his destructive lifestyle. Instead, it just kept getting worse and worse. He was doing so much crystal meth and cocaine that he would literally come to work and sit in the bathroom stalls with his head against the wall because his head would hurt so bad from the effects of the drugs. Usually, it wasn’t until later in the week when Tim could do his job at all.

If it wasn’t for being befriended by a senior engineer who covered for him, Tim would have surely been fired for poor performance. Then one day the chief engineer called Tim into his office and told him he wanted to review his work. It was a miracle that he didn’t lose his job.

In fact, it was a miracle that Tim got the job in the first place because if he had taken the required drug test on the day the company asked him to take it, he would have failed it. But when he got to the testing center, Tim found that it had just burned down which gave him a time to purge the drugs from his system.

Tim believes these two miracles were orchestrated by God because getting and keeping the job led to Tim being transferred to San Antonio, Texas for a new assignment. It was there that a co-worker gave Tim some tracts, which Tim read. This led to the man giving Tim the book “The gospel according to Jesus” by John MacArthur. Tim stopped by the store that night and bought his usual two 40 ounce cans of beer in order to drink himself into oblivion. When he got home, Tim sat down with the beer in one hand and the book in the other. Thankfully, he just couldn’t put the book down.

On one hand, Tim had God’s word telling him that he can’t be the Lord’s disciple unless he forsakes all. It was teaching him “what does it profit a man to gain the whole world but lose his soul?”. But at the same time, the devil was whispering in his ear that the way he’d been living his life is who he is and he can’t give it up. Tim remained in this conflicted misery for the better part of three months. He kept trying to drink himself into oblivion but he just couldn’t put the book down.

Eventually, Tim started listening to tapes from MacArthur’s lending library and also bought a bible and read through the New Testament in two weeks. He was being convicted by God’s word on every single page of the New Testament.

Tim continued to try to drown out the emptiness in his heart with alcohol. He was at the end of his rope. One night, Tim came home drunk and listened to one of John MacArthur’s messages on Isaiah 6, about the holiness of God. He just fell on the floor and fell asleep. Somewhere in the middle of that night, he woke up trembling from head to foot and cried out to the Lord with just three words: Lord help me.

Tim was saved that night. The evidence of his conversion is that:
Tim now serves as the pastor of Grace Community Church in San Antonio, Texas. You can watch many of his videos on YouTube.