The 3 tenses of salvation 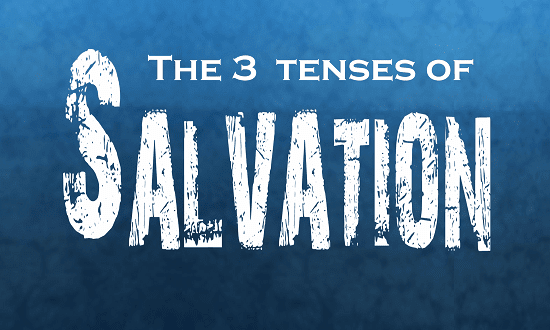 Did you know that the Bible refers to salvation in the past, present, and future tense?


Past tense of salvation

A believer experiences this phase of salvation when they first believed. This occurs the moment you're saved from the penalty of sin by putting your faith in Jesus Christ.


For by grace you have been saved through faith, and that not of yourselves; it is the gift of God, not of works, lest anyone should boast.
Ephesians 2:8-9 NKJV

When we were saved, we became a new creation. We became children of God. We didn’t have to earn it. How glad are you about that? I know I am because no one can ever earn their salvation by their own efforts. There’s no amount of good works that we could ever do to earn our way into the presence of a holy a just God.

The Apostle Paul makes this point clear in his letter to Titus:


Not by works of righteousness which we have done, but according to His mercy He saved us, through the washing of regeneration and renewing of the Holy Spirit, whom He poured out on us abundantly through Jesus Christ our Savior, that having been justified by His grace we should become heirs according to the hope of eternal life.
Titus 3:5-7 NKJV

But don’t take my word for it. Read the words of Jesus for yourself:

Given the dire importance of the first tense of salvation, I feel it necessary to offer a note of caution. We must understand that salvation, and therefore the regeneration of our minds doesn’t come about by only knowing the gospel. Even the demons know that Jesus is the Son of God and they tremble with fear.


You believe that there is one God. You do well. Even the demons believe—and tremble!
James 2:19 NKJV

Rather, I’m talking about salvation that comes from putting our faith in Jesus. The kind of faith that comes from your heart. As Romans 10: 9 says “that if you confess with your mouth the Lord Jesus and believe in your heart that God has raised Him from the dead, you will be saved.”

After we’re saved, we transition to the next tense of salvation. This is known as the sanctification process. This is the phase of our Christian life where the Holy Spirit works in us to convict us of our sins. Since we all slip up from time to time, this is a life-long process, but one we need to take very seriously.

As the Apostle Paul said to the Philippian church:


Therefore, my beloved, as you have always obeyed, not as in my presence only, but now much more in my absence, work out your own salvation with fear and trembling; for it is God who works in you both to will and to do for His good pleasure.
Philippians 2:12-13 NKJV

Before we were saved, we couldn’t stop sinning. At least not for long. But after we’re saved, the Holy Spirit gives us the power to overcome the sin in our lives. After all, Jesus wouldn’t have commanded us to “sin no more” if we weren’t able to obey that command (John 5:14).

And yet, all too often we make compromises in this area. We try to justify our sins. We try to convince ourselves (and sometimes others) that they’re not a big deal. But what did the Apostle Paul say? He said to work out our salvation (the sanctification process) with fear and trembling. In other words, this is of vital importance. Not because we might lose our salvation but because there are consequences to compromising. Or, don’t you know that God disciplines His children who practice disobedience (Hebrews 12:6)?

In addition to opening ourselves to God’s discipline when we’re disobedient, consider these reasons to take the sanctification process seriously:
So how can we work out our salvation?

Here are some things that help me.
The good news is that, as a believer, we’re no longer powerless from the death-grasp of sin. Unlike the unsaved, Jesus Christ and the Holy Spirit gives us the power to resist Satan and his demons.


Past tense of salvation

Now for the really great news. Once we’re with the Lord in our glorified bodies, we’ll finally be saved from the presence of sin. No longer will we be tempted to war against God’s will. Isn’t that wonderful news?