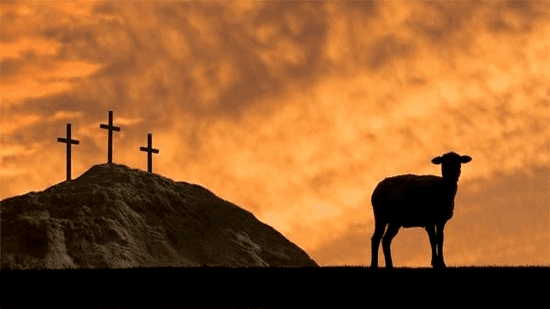 God commanded Abraham to sacrifice his son, Isaac as a test of his love and obedience. A test that he passed with flying colors, by the way. I have no doubt that Abraham believed that even if he had sacrificed the son he dearly loved, that God would resurrect Isaac from the dead. After all, God had promised Abraham that his offspring would outnumber the sands of the sea. As Abraham and his son ascended Mount Moriah together, Isaac asked his father “where is the lamb for a burnt offering?” (Genesis 22:7). Abraham told Isaac that God himself would provide a lamb for a burnt offering. This proved to be a prophetic statement.

The sacrificial lamb also appeared at the first Passover, when God told Moses that every Jew should sacrifice a lamb and sprinkle its blood on their doorposts so that the judgment that was about to come upon the Egyptians would pass over them (see Exodus chapter 12).


Now the blood shall be a sign for you on the houses where you are. And when I see the blood, I will pass over you; and the plague shall not be on you to destroy you when I strike the land of Egypt.
Exodus 12:13

Then the Lord told Moses that this day shall be remembered every year.

As you can see, the Jewish people understood the significance of the sacrificial lamb. So, the day Jesus was baptized, when John declared “Behold the Lamb of God who takes away the sin of the world”, the people in attendance should have understood that John was declaring Jesus to be their Messiah because the Jews understood that only God can take away sin.


The next day John saw Jesus coming toward him, and said, “Behold! The Lamb of God who takes away the sin of the world! This is He of whom I said, ‘After me comes a Man who is preferred before me, for He was before me.’ I did not know Him; but that He should be revealed to Israel, therefore I came baptizing with water.”

And John bore witness, saying, “I saw the Spirit descending from heaven like a dove, and He remained upon Him. I did not know Him, but He who sent me to baptize with water said to me, ‘Upon whom you see the Spirit descending, and remaining on Him, this is He who baptizes with the Holy Spirit.’ And I have seen and testified that this is the Son of God.”
John 1:29-34

Jesus is the same Lamb of God that the prophet Isaiah spoke about in Isaiah chapter 53.

You see, it was God’s plan all along to provide a spotless and blameless lamb to redeem the world (1 Peter 1:19). This was God’s plan to pay the penalty for our sin. Jesus paid the debt that we owed but could never pay.

Jesus was fully aware of His Father’s plan for our redemption. He knew full well what awaited Him at Calvary. So much so that it grieved Him to the point of sweating great drops of blood. While praying to the Father on the Mount of Olives, Jesus said: “Father, if it is Your will, take this cup away from Me; nevertheless not My will, but Yours, be done” (Luke 22:42).

Jesus had the free will to refuse His Father’s plan. He could have refused to pay the price for our redemption. He could have called down the armies of heaven, if need be, to save Himself from that dreadful fate. Satan would have loved nothing more because if Jesus had not been willing to be our sacrificial Lamb, then we would still be lost in our sins. If Jesus hadn’t risen on the 3rd day, then we would have no hope in our own resurrection from the dead.

I thank God that Jesus was an obedient Son. I’m thankful that He loves His Father and loves us so much that he would pay the price of redemption that we could never pay. Jesus has redeemed all who believe on His name. He has secured our forgiveness and has given us a permanent place in God's family as children of God.

We should remember and be grateful for this fact every day, but especially on Easter. I pray that you will meditate on what the Father and Jesus have done for you. The Father has given us His only begotten Son (John 3:16). He only asks that we believe on the name of the Lord, Jesus with all our heart.