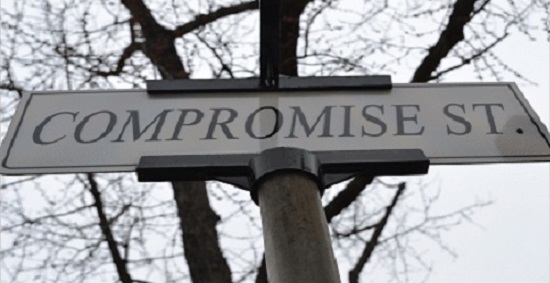 Compromise can be a good thing. Especially when it’s a win-win situation without violating God’s laws. It can also be good when it results in reconciliation. But compromise can also be dangerous. Compromising God’s will for our lives is an insidious danger—one that seems to be always lurking around. The truly insidious thing about ungodly compromise is that it usually starts out as a seemingly insignificant choice but can often lead to bigger and more dangerous ones. Compromising God’s laws always lead to disappointment and often destroys our lives and the lives of others.

I think most people don’t even realize they’ve slid into compromise until the damage is done. There are many examples of this in the Bible. God told Solomon not to make alliances with other nations or even associate with them. Solomon compromised God’s command by purchasing horses from Egypt. Seems innocent enough, right? But he didn’t stop there. God had commanded the Jews not to take wives from other nations. Solomon breaks that commandment by marrying Pharaoh’s daughter and then hundreds of other wives from other nations.

God had a good reason to command the Jews not to marry outside the Jewish nation. It’s because God knew that doing so would result in the Jews worshiping the false gods of those other nations. And this is exactly what happened. Solomon not only allowed idol worship in Israel, but he even built a high place to worship Molech (1 Kings 11:1-13). The worship of this detestable false god was associated with child sacrifice. Solomon started well but he let his compromises take him further and further out of the will of God.

There are many other equally horrific examples in the Bible where God’s people made ungodly compromises. David was a great king of Israel. But he compromised by committing adultery with Bathsheba, another man’s wife. This led to numerous sins, including the murder of Bathsheba’s husband (2 Samuel chapter 11). Samson’s fornication with Delilah, a Philistine harlot led to his death (Judges 16:1-30). We should consider these examples as a stern warning from the word of God for our own lives.

It seems we’re constantly under attack by satanic forces who try to urge, trick, prod, and tempt us into compromising just a little bit here and a little bit there. Satan knows that if he can’t stop us from getting saved, then he’ll go to plan B, which is to keep us from living an obedient and therefore fruitful life of service to the Lord.

Small compromises lead to more serious ones.
With each successive concession, our conscience is weakened.
Ultimately whenever we give way to evil—whether we let go
of a doctrinal belief or simply listen to music
that taints our thoughts—we always lose.
Pastor Charles Stanley

How to become a non-compromiser

In order to become strong enough to resist the temptation to compromise God’s laws, we must develop some essential beliefs and habits. First, we need to believe that the Holy Bible is God’s word and depend on it to guide our daily decisions.


All Scripture is given by inspiration of God, and is profitable for doctrine, for reproof, for correction, for instruction in righteousness, that the man of God may be complete, thoroughly equipped for every good work.
2 Timothy 3:16-17

We need to learn the godly principles that were handed down to us through the Bible and meditate on them daily. Our prayers should reflect the words of the psalmist, who wrote:


Uphold my steps in Your paths, That my footsteps may not slip.
Psalm 17:5

We need to flee from the temptations in life, such as gossiping, flirting with a co-worker, or drunkenness. All too often, these little compromises lead to the bigger, more devastating ones. If we surrender our lives to God, we will shatter our enslavement to compromise and give us rest in Him.