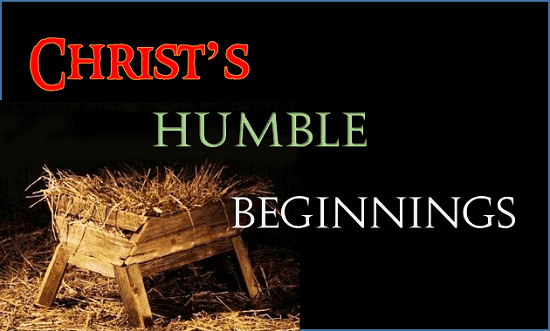 But that wasn’t God’s plan.

The prophet Micah wrote hundreds of years before Jesus was born, that Messiah would be born in Bethlehem.


But you, O Bethlehem Ephrathah, are only a small village among all the people of Judah. Yet a ruler of Israel, whose origins are in the distant past, will come from you on My behalf.
Micah 5:2 (NLT)

Not only was Jesus born in a place of no earthly significance but He was also born in a manger (Luke 2:4-7 NKJV). Can you imagine a more humble beginning to your life than to be born in a trough used to feed livestock?

After a detour to Egypt, to avoid Jesus being killed by King Herod, Joseph and Mary brought Jesus to their home town of Nazareth (Luke 2:39 NKJV) which  was a place that no one would expect anyone of significance to come from. Certainly not the Messiah. But this is where the Son of God was raised.

In fact, one of the men that Jesus chose to be one of His disciples said “Can anything good come out of Nazareth?” (John 1:43-46 NKJV).

It’s clear that Jesus had none of the advantages or privileges that successful people typically have. But He had something better than monetary wealth. He had the Holy Spirit in Him and He also had a personal relationship with God the Father. In fact, from an early age, Jesus became strong in spirit, He was filled with wisdom, and had the grace of God upon Him (Luke 2:40 NKJV).

Not only did Jesus leave the splendor of His heavenly throne to be born as a human under such humble circumstances, but His entire life and ministry testify that it wasn’t His goal to achieve what people typically equate as a success.
Although Jesus didn’t do the typical things that men do to achieve success, His teachings have had a greater impact on this world than anyone who has ever lived.

I think there’s a lesson in this for all of us. And that lesson is that even if we begin and live our lives under humble circumstances, we can still do great things for the kingdom of God. Yes, Jesus cast out demons and healed the sick but He said that anyone who believed in Him would do even greater things.


Most assuredly, I say to you, he who believes in Me, the works that I do he will do also; and greater works than these he will do, because I go to My Father.
John 14:12 (NKJV)

Don’t let your humble beginnings be an excuse to sit idly by. Take every opportunity to share the gospel and further the kingdom of God.

May God bless you richly as we celebrate the birth of our Lord and Savior.
Daniel

Who were the wise men who worshiped baby Jesus?
The Rabbi who leads the church
Why Jesus taught in parables
Christian Living