9 Proofs that Jesus rose from the dead 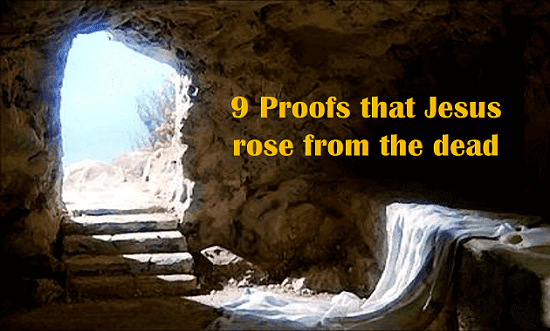 In his book, The Case for the Resurrection of Jesus, Gary Habermas provides compelling proofs that Jesus rose from the dead as the Bible says He did. Here are nine of the most compelling proofs.

It’s obvious that in order to be resurrected from the dead, you must first die. So, a common tactic of atheists is to put forward the idea that Jesus didn’t actually die on the cross but instead feigned his death and then recovered while He was in the tomb.

Death on a cross was a long process in which the victim would suffocate when they could no longer push themselves up to fill their lungs with air. This process could take days. To speed things up and to guarantee the victims demise, the soldiers would typically break the victim’s legs so that they could no longer take a breath. This would cause them to quickly suffocate.

But the soldiers didn’t break Jesus’ legs. Because they saw that Jesus was already dead, one of the soldiers thrust a spear into Jesus’ side and blood and water came out (John 19:31-37). This is a significant proof of death because medical doctors today know that the water that’s in our blood separates from the blood after death.

A Jewish burial in those days was a major event, so several people would have witnessed it. To prepare a body for burial, the Jews would bind the body with strips of linen and about 100 pounds of a mixture of myrrh and aloes. This is how Jesus’ body was prepared before enclosing him in the tomb (John 19:38-41).

Proof 3: The tomb was empty

Not only was the tomb found to be empty (Luke 24:1-7) but the Roman guard who was tasked by the Governor to guard the tomb was nowhere to be found. The high priest of Israel bribed the guards to say that they had fallen asleep during their watch and told them that they would smooth things over with the Governor if word of it reached his ears. This lie is still told in Israel to this very day. But the fact is that it’s simply not plausible that the disciples could have rolled away a two-ton stone, snuck into the tomb, and stole the body of Jesus while the guards were asleep. Also, for a Roman soldier to fall asleep on guard duty would have resulted in the guards being put to death.

Proof 4: The disciples saw Jesus and were transformed

Thomas even put his hand in the wound in Jesus’ side (John 20:27). They knew without a doubt that Jesus was who He claimed to be, the Son of the living God and the Messiah.

Proof 5: The resurrection was central to the disciples teaching

The resurrection of Jesus became central to the gospel message that the disciples boldly proclaimed everywhere they went. They wouldn’t have made this a central theme of the gospel if it could have been disproven.

Proof 6: The gospel was proclaimed in Jerusalem

The fact that the gospel was proclaimed in Jerusalem, the very city where Jesus was crucified and resurrected is proof that the resurrection really happened because if it had been a lie, it would have surely been disputed by many people. But the fact is that not only did Jesus appear to the Apostles after His resurrection but He also appeared to 500 others as well (1 Corinthians 15:3-6).

Proof 7: The church was formed and grew like wildfire

The disciples had no earthly incentive to spread the gospel. In fact, they were persecuted for it and most of them were put to death for proclaiming their faith. This is one of the strongest proofs that the gospel they preached is true because it would be unlikely that anyone would go to their death for a lie. And it’s absolutely not at all plausible that eleven Apostles would refuse to recant a lie in order to save their lives. The only reason that the disciples would persist under these circumstances is that they were telling the truth about the resurrection of Jesus Christ.

James, the brother of Jesus didn’t become a believer until Jesus appeared to him after the resurrection (1 Corinthians 15:7). After that, James became a leader in the Jerusalem church and wrote the book of James.

Proof 9: Paul was converted and became an evangelist to the Gentiles

Saul of Tarsus, who Jesus later renamed Paul was the foremost persecutor of believers after Christ’s resurrection (Acts 8:3). After securing permission from the high priest to persecute believers in Damascus, Saul set out on the road to Damascus where he was met by the Lord and converted into a believer (Acts 9:1-6). He went on to establish the first seven Gentile churches until he was finally martyred by the Romans.

If you had any doubts that Jesus rose from the dead, I pray that this message has helped to dispel those doubts.

May God richly bless you,
Daniel

He is risen, indeed
15 prophetic signs fulfilled by Jesus
Jesus