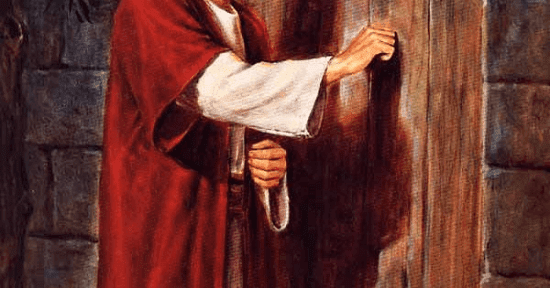 Right after Jesus recited what we refer to as the Lord’s prayer, He told this parable which teaches the importance of being persistent in prayer. The first part of this parable is about a man who goes to his friend’s home at midnight to ask him for bread.


And He said to them, “Which of you shall have a friend, and go to him at midnight and say to him, ‘Friend, lend me three loaves; for a friend of mine has come to me on his journey, and I have nothing to set before him’; and he will answer from within and say, ‘Do not trouble me; the door is now shut, and my children are with me in bed; I cannot rise and give to you’? I say to you, though he will not rise and give to him because he is his friend, yet because of his persistence he will rise and give him as many as he needs".
Luke 11:5-8

Jesus’ disciples may have snickered a little bit when they heard this parable because Jewish culture in those days was such that the whole village would have felt responsible for taking care of this man’s guest. So, in Jesus’ day, it wouldn’t be likely that the friend would try to send his neighbor away empty-handed for any reason. In fact, he probably would have given him more than he asked for. But it does drive home an important point which Jesus reveals in the second part of this parable, which is the importance of being persistent in prayer.


So I say to you, ask, and it will be given to you; seek, and you will find; knock, and it will be opened to you. For everyone who asks receives, and he who seeks finds, and to him who knocks it will be opened. If a son asks for bread from any father among you, will he give him a stone? Or if he asks for a fish, will he give him a serpent instead of a fish? Or if he asks for an egg, will he offer him a scorpion? If you then, being evil, know how to give good gifts to your children, how much more will your heavenly Father give the Holy Spirit to those who ask Him!
Luke 11:9-13

Just like the man in the parable was persistent with getting bread from his neighbor in order to feed his guest when our prayers are not answered as quickly as we’d like, we need to remember to stay persistent and keep asking God for what we need.

May God bless you richly as you remain steadfast and persistent in prayer!
Daniel