3 ways to prepare for the Goliaths in your life 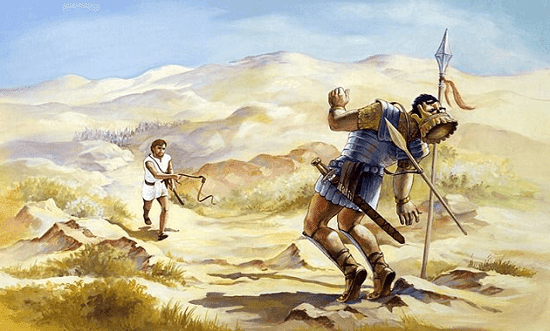 Believers and unbelievers alike face challenges in their lives that are bigger than themselves. I'm talking about the storms that inevitably come crashing down on us and would surely overwhelm us if not for the providential power that's outside of ourselves. It appears that some people need to hit rock bottom and be completely broken before they will call out for God's help. And who better to call than our heavenly Father?

The giants that we all face remind me of the story of David and Goliath.

The problem is that Goliath was a giant, towering 9 feet 9 inches tall. The tallest person on Israel's side was King Saul, and he wasn't about to fight the giant. And who would blame him? After all, the giant's armor of leather and bronze weighed about 125 pounds and the iron tip of his spear alone weighed 15 pounds. Not only that but he carried a bronze javelin on his back, and a huge sword at his side. Just try to imagine how strong Goliath must have been, just be able to carry all of that armor and weaponry. No wonder no one in Israel's army was willing to fight him. Even after King Saul promised to make the victor wealthy, exempt from taxes, and give him the hand of his daughter in marriage (1 Samuel 17:25 NKJV).

They were not only afraid but they were dismayed and greatly afraid (1 Samuel 17:11 NKJV). Perhaps the Israelites had forgotten the victories God had given Israel in times past. Forgetfulness of God’s past deliverance diminishes our confidence when we face conflict. But then there was David, a young man who trusted in God so completely that even as a teenager, he was not only willing but was determined to face Goliath, even when no one else would.


Then David said to Saul, “Let no man’s heart fail because of him; your servant will go and fight with this Philistine.”
1 Samuel 17:32 NKJV

What's really interesting to me is how God had prepared David for Israel's adversary, beforehand. As David stood before Saul declaring that he would face the Philistine champion, he explained to the king how his past victories over a lion and a bear gave him the faith to trust God for victory.


But David said to Saul, “Your servant used to keep his father’s sheep, and when a lion or a bear came and took a lamb out of the flock, I went out after it and struck it, and delivered the lamb from its mouth; and when it arose against me, I caught it by its beard, and struck and killed it. Your servant has killed both lion and bear; and this uncircumcised Philistine will be like one of them, seeing he has defied the armies of the living God.” Moreover David said, “The LORD, who delivered me from the paw of the lion and from the paw of the bear, He will deliver me from the hand of this Philistine."

Then David faced the giant with nothing but a sling, the typical weapon of a shepherd, and 5 smooth stones. Have you ever wondered by David gathered 5 stones instead of just one? It's not because he thought he would miss. It's because Goliath had brothers!

Well, I bet you know how this story ends. David kills Goliath with the first stone and then cuts off his head with Goliath's own sword.

Just as God gave victory to His servant, David, our heavenly Father will give you victory over the giants in your life, if only you will put your trust in Him. But realize that the wise prepare for the battles they know are looming on the horizon. So let's see how we can prepare for the battles that will surely come your way and how we can weather them when those storms arrive.

God speaks to us through His word. But we need to not only read His word, but we also need to actually understand it so we can apply it to our lives. This takes dedication. This requires us to make an effort to actually study the bible and not only glance over the words.

Just like pilots use radar to detect storms so they can fly around them, do you realize that we can avoid many of the storms in life and the schemes of our adversary, the devil if we learn and heed God's instructions? Yes, the bible is full of do's and don'ts but it's not because God doesn't want us to have any fun. It's because He knows what's best for us. If our Father in heaven warns us not to do something, we should take what He says to heart and obey. After all, if you're a Christian doesn’t that make you a child of God? Yes, it does, and children should obey their fathers. Of course, in order to obey God, we need to learn what He expects from us. And we learn what He expects by knowing His word.

How many times have you found yourself in the middle of a situation that had spun totally out of control? We should pray for God's protection over our lives each day. But when we find ourselves in the middle of the storm, prayer should be our first response, not our last. Pray until you get an answer. God will provide the answer in His time, not ours. So be diligent in prayer.

You might try praying for guidance while reading the bible. Sometimes God directs you to the exact passage of scripture that you need to solve your problem.

God didn't intend for us to do life alone. Just as God recognized that Adam needed a helper when He created Eve, He knows that we all need someone to lean on from time to time. This is why Jesus instructed us to love one another (see John 13:34-35). Seek guidance from Godly people who have a solid understanding of God's word. Ask for their guidance so that you can avoid stumbling and to lift you up when you fall.

Remember, we all face giants in life. Problems that are sometimes too big for us to handle on our own. But with the right preparation, faith in God, and help from a Godly friend, we can be like a large tree with deep roots that stands strong in the storm. When you put down deep roots in God's word, you too can weather any storm this world might send your way.

13 benefits of knowing and meditating on God’s word
Spurgeon on how to read the bible
15 biblically-based reasons to pray
How God speaks to us
- November 18, 2018