Unhitching from the Old Testament 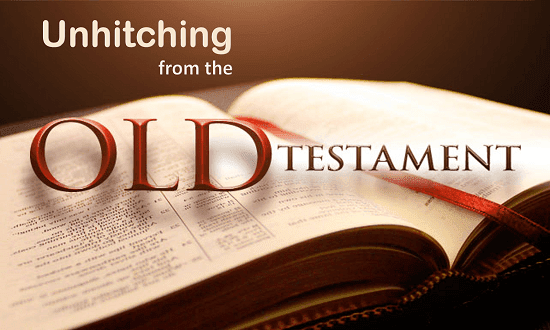 There's a deliberate effort by some church leaders today to discourage people from reading the Old Testament. That's most of the Holy Bible! Why on Earth would a pastor or a church leader do this?


Thoughts about the Old Testament from Andy Stanley

In his latest book, Irresistible: Reclaiming the New that Jesus Unleashed for the World, megachurch pastor, Andy Stanley says the problem with the modern church is “our incessant habit of reaching back into the old covenant concepts, teachings, sayings, and narratives”. Andy claims that the Old Testament has led to the "prosperity gospel, the Crusades, anti-Semitism, legalism, exclusivism, judgmentalism,” and more”. He then asked church leaders: “Would you consider unhitching your teaching of what it means to follow Jesus from all things old covenant?”

I have to fervently and respectfully disagree with Pastor Stanley's analysis. When you take the teaching of the entire Bible as a whole and rightly divide God's word, I don't see how he came up with these ideas. The idea that the Old Testament teaches the prosperity gospel seems like a stretch to me. But the idea that the Old Testament is the cause of the Crusades and anti-Semitism are just too far-fetched.

It's not my intention to cause any harm to Pastor Stanley's reputation or to his following. I've heard that no one works harder to bring people to a saving faith in Jesus Christ that Andy. And that’s admirable. So I'm assuming his intentions and motives are good. After all, he makes it clear that he thinks that the Old Testament is one of the top reasons why some people refuse to believe the gospel. I just feel strongly that pastor Stanley happens to be very wrong about giving up on the Old Testament.


Why we shouldn't unhitch ourselves from the Old Testament

If you have a Bible with cross-references in the margins, take a look. You might be surprised at how many times the New Testament authors quoted or alluded to scripture from the Old Testament.

I realize that there are aspects of the Old Testament that Jesus has made obsolete. For example, the temple, animal sacrifices, and earthly priests are no longer needed since Jesus fulfilled the law. Certainly, someone can come to a saving faith in Jesus Christ without knowing anything about the Old Testament. But they would be missing so much of the richness that the bible has to offer.


The richness of the Old Testament

The Old Testament prophecies that Amir read that brought him to a saving faith in Jesus were the same scriptures that the Pharisees and Sadducees of Jesus day apparently missed.

Another reason why Bible prophecy is important is that when you know that God has fulfilled His word to the letter in the past, you can rest assured that His prophecies about the future will also come to pass.

Speaking of future prophecies, if you've read through the entire New Testament you might remember that Jesus told the disciples what we need to look for, so we'll be ready when He returns for us (see Luke chapter 21). And those are good things to remember because Jesus said:


Now when these things begin to happen, look up and lift up your heads, because your redemption draws near.
Luke 21:28

If you've been avoiding the Old Testament for any reason, I hope you'll give it another try. If you're leading someone to Christ or mentoring a new Christian, however, I suggest that you ask them to read the New Testament first. Then have them read the entire bible from cover to cover. This way, they'll learn the gospel of Jesus and learn to really appreciate what the Son of God sacrificed for us before they get into the history of how God dealt with wicked people in the Old Testament times. The last thing I want is for someone to give up on Christ after they read about how God killed all but 8 humans on the earth or how He commanded the Israelites to drive out the inhabitants from the land before they've had a chance to digest the teachings of Jesus. Reading the New Testament first will also help them identify and understand the Old Testament scriptures that point to Jesus.

Destruction of Damascus
Signs of the End: The Ezekiel 38-39 War
15 prophetic signs fulfilled by Jesus

This message was inspired by the blog post, Why We Can’t Unhitch from the Old Testament by Michael Kruger
- November 14, 2018