The Thieves on the Cross 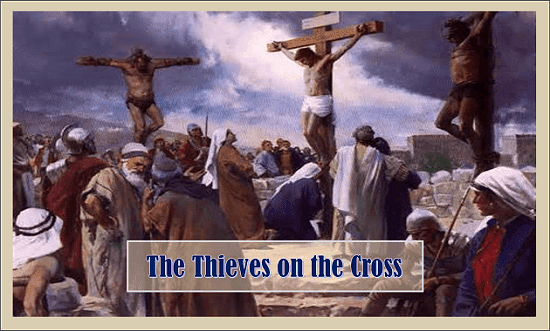 While Jesus hung on the cross, he was ridiculed and mocked by the people who were passing by as well as by the chief priests, scribes, & elders. As if that weren’t bad enough, He was also mocked and ridiculed in the same manner by the two thieves who were being crucified on His left and on his right (Matthew 27:38-44 NASB).

But then one of those thieves had a change of heart.


One of the criminals hanging beside him scoffed, “So you’re the Messiah, are you? Prove it by saving yourself—and us, too, while you’re at it!”

But the other criminal protested, “Don’t you fear God even when you have been sentenced to die? We deserve to die for our crimes, but this man hasn’t done anything wrong.” Then he said, “Jesus, remember me when you come into your Kingdom.”

Because the thief had confessed his sins and acknowledged Jesus as God, he was saved from an eternity in hell. We aren’t told why this man had a sudden change of heart. Perhaps he thought he could provoke Jesus into saving him from physical death on the cross and when he realized that wasn’t going to happen he came to his senses and accepted the reality of his situation. Perhaps his spirit was touched when he heard Jesus ask His father in heaven not to hold His death against those who were crucifying Him.

We simply don’t know why the thief had a sudden change of heart.

This man’s last-minute conversion is not at all, unlike many deathbed conversions that happen every single day. Too many people resist Jesus as Lord and Savior their entire lives and then seemingly out of desperation and fear, they accept Him just before they die.

So many young people say they’ll accept Christ when they’re old. The problem with this attitude is that they’re gambling with their eternal destiny because no one knows when they’ll draw their last breath. It just isn’t worth risking an eternity in hell in order to live your life on your own terms.