Dead people don't normally do that 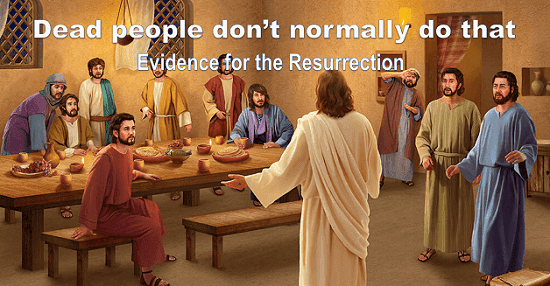 The resurrection of Jesus Christ is at the very core of the Christian faith. As the Apostle, Paul said, “If Christ has not been raised, your faith is futile; you are still in your sins" (1 Corinthians 15:17). Referring to the resurrection of Jesus, Professor Gary Habermas said you have to ask yourself these two questions: “First, did Jesus die on the cross? And second, did he appear later to people? If you can establish those two things, you’ve made your case, because dead people don’t normally do that.”


The disciples and other witnesses

The Apostle Paul summarized the eyewitness accounts when he wrote this to the Corinthian church:

What makes this evidence especially compelling is that Paul mentioned specific people and groups of people who saw the resurrected Jesus. Not only that but he made this statement at a time when anyone who cared to do so could have verified what he was telling them was true. He was virtually inviting people to check it out for themselves. They could have gone directly to James or Cephas (Peter) or any of the other Apostles. They could have asked any of the 500 brethren who were still alive. Paul was a brilliant man. He would never have made these claims if they weren’t true. He wouldn’t have put his credibility in jeopardy over a lie that could be so easily discredited.

Referring to the resurrection account in 1 Corinthians chapter 15, German historian Hans von Campenhausen said, “This account meets all the demands of historical reliability that could possibly be made of such a text. Besides, you don’t need to rely on the reference to the five hundred to make the case for the resurrection. Usually, I don’t even use it.”

Speaking in a synagogue in Antioch, the Apostle Paul boldly declared:


The people of Jerusalem and their rulers did not recognize Jesus, yet in condemning him they fulfilled the words of the prophets that are read every Sabbath. Though they found no proper ground for a death sentence, they asked Pilate to have him executed. When they had carried out all that was written about him, they took him down from the cross and laid him in a tomb. But God raised him from the dead, and for many days he was seen by those who had traveled with him from Galilee to Jerusalem. They are now his witnesses to our people.
Acts 13:27-31 (NIV)

Here's a rundown of other post-resurrection appearances of Jesus:
As prominent British theologian Michael Green said, “The appearances of Jesus are as well authenticated as anything in antiquity. There can be no rational doubt that they occurred and that the main reason why Christians became sure of the resurrection in the earliest days was just this. They could say with assurance, ‘We have seen the Lord.’ They knew it was he.”


The Apostles went to their death defending the truth

After Jesus was crucified, the disciples were discouraged and depressed. The movement was all but stopped in its tracks. That is until they met the resurrected Jesus. That’s what changed the Apostle’s lives and started the church. The book of Acts is evidence of this. They gave up their occupations to spread the gospel of Jesus Christ, even though doing so offered no earthly benefit to them. In fact, most of the Apostles faced a horrible death defending what they knew to be true. The truth that Jesus Christ was the Messiah, who died on the cross, was raised to life and was seen alive by them. If it were all a lie, wouldn’t some of them have fallen away? Wouldn’t some of the Apostles have recanted a lie rather than facing a gruesome death? Of course, they would have. People will die for a lie they believe to be true. But nobody willingly dies for something they know is a lie.

And another thing: James, the brother of Jesus didn’t believe that Jesus was who He claimed to be until he met the resurrected Jesus. If James didn’t believe after all the time he had spent with Jesus before the cross, there’s only one reason he would become a believer and a leader in the Jerusalem church after Jesus was crucified. It’s because James saw the resurrected Christ.

Did Jesus really die on the cross?
9 Proofs that Jesus rose from the dead
15 prophetic signs fulfilled by Jesus
Easter Jesus