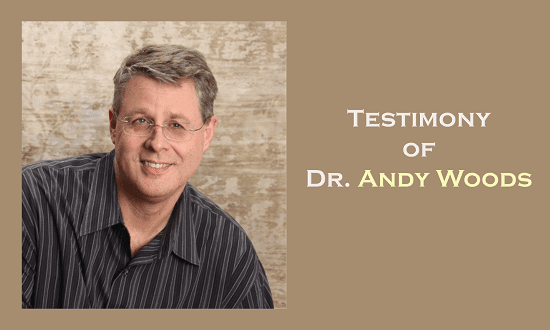 I’ve been listening to Dr. Andy Wood’s sermons for several months now. He teaches slowly through entire books of the Bible. I’ve especially enjoyed his teachings on the book of Revelation and his series on Soteriology: the doctrine of Salvation. I truly appreciate his gift for teaching the Bible in a way that’s easy for a regular person like me to understand.

Andy’s testimony teaches us important life lessons. The first is that you can be active in your church for years and think that you are saved when you’re not. And the second lesson is the one that inspired me to write Dr. Wood’s testimony. Which is that God has a way of directing the circumstances in your life to lead you down the path He wants you to follow.


For the first 16 years of his life, Andy was a card-carrying Episcopalian, which isn’t too different from Roman Catholicism. Even though some seeds of faith were planted in Andy’s young life, the church services he attended were very high on ritual, which Andy likes to call “the smells and the bells”.

Once in a while, the priest would chant a homily, but he didn’t really teach the Bible very much. It was a moral church, but it wasn’t a church that preached the gospel clearly, if at all. Andy was involved in various aspects of church life and was even given a cross as a reward for perfect Sunday school attendance. Andy thought that because he was religious, he must be saved. But a life-changing event was about to have an impact of eternal significance.


In 1983, Andy’s best friend in high school, who attended a different church, invited him to a home Bible study. It just happened that the teacher of the group was teaching John chapter 3. The following verses, about Jesus’ encounter with Nicodemus, convicted young Andy to his core.


Jesus answered and said to him, “Most assuredly, I say to you, unless one is born again, he cannot see the kingdom of God.”

Nicodemus said to Him, “How can a man be born when he is old? Can he enter a second time into his mother’s womb and be born?”

Andy was amazed at what he had just heard because this was the first time he ever heard that he needed to be born again. Until that point in his life, he thought he was fine as he was. He thought that being religious would get him into heaven. This was a divine wake-up call directly from God’s word!

Andy sat there not fully understanding what the text he had just heard meant. But one thing he understood was that whatever it was, he didn’t have it. Fortunately for Andy, the person teaching the Bible study had enough discernment to realize what was going on in Andy and led him to Christ that very night.


Even though Andy was now saved, for the next six years, he continued to follow the unholy trinity of me, myself, and I. He wanted to live his life on his own terms, and not God’s. That’s definitely something that I can relate with.

It was a time when the stock market was booming in America and the country was producing lots of millionaires. Enticed by what he saw, Andy’s goal was to go to law school and then make as much money as he could. But little did he know that God would soon begin to disrupt his plans.

One day, a youth pastor asked Andy to teach a Bible study for young adults. Andy didn’t have any desire to teach a Bible study but agreed to do it for one month. He was surprised when he found that he actually liked doing it and saw that it was producing fruit in the lives of the people he was teaching. Andy had just discovered his spiritual gift.


A spiritual gift is given to each of us so we can help each other.
1 Corinthians 12:7 NLT

Meanwhile, Andy graduated from law school and became a member of the California bar. He planned to become an attorney while serving God on the side. He practiced law in California for a couple of years, but God had other plans for his life and would soon disrupt Andy’s plans once again.


The pastor of the church where Andy was teaching the Bible study, retired. The church was too small to hire a full-time replacement pastor. So, Andy found himself as the interim pastor at a small church in the Los Angeles area. Things went well for a while as Andy knew one or two books of the bible pretty well. But then an elderly lady in the church asked Andy to teach a bible study on the book of Ezekiel. As Andy began to study the book, he realized very quickly that he didn’t know what he was doing.


God began to impress on his heart that, even though he had the gift of pastor-teacher, he wasn’t equipped to teach the full council of God. The Bible verse, James 3:1 which reads “My brethren, let not many of you become teachers, knowing that we shall receive a stricter judgment.”, convinced him to seek seminary training.

Around this time he met his wife, Ann. They prayed about what seminary Andy should choose and ended up deciding on Dallas Seminary because many of the respected pastors they grew up listening to came from there.

Andy graduated with his Master of Theology (ThM) degree in 2002 and thought he was done. But Dr. J. Dwight Pentecost, who was a professor there, talked him into going into the PhD program, which Andy started in 2003 and completed in 2009.

Along the way, he met a teacher named Israel Locen who was teaching classes at Dallas Seminary. Israel later began teaching at the College of Biblical Studies in Houston Texas, where he still teaches. As Andy was nearing the completion of his PhD program, Israel Locen called to ask Andy if he’d like to interview for a position as a Bible teacher at the College of Biblical Studies.

So, Andy interviewed for the job in 2008. The moment he set foot on the campus, he began to sense the presence of God there and felt that God was doing something special there. The school called Andy a couple of weeks later and offered him the job. Andy told his wife Ann, who said: “we’re not going”. Andy was wise enough to leave it in God’s hands and God gradually changed her heart. So, Andy took the job while still working on his doctorate degree.

Again, Andy thought this was the end of the story, but it turns out that God had something more in store for him.

Andy and Ann bought a house in Sugar Land, which is about a 15-minute drive from Houston. Since moving from Dallas, and starting his new job, Andy and his wife hadn’t yet found a church to call home. As a Bible teacher at a college, Andy thought this doesn’t look good, so they started attending Sugar Land Bible Church. They weren’t looking for a position of leadership in the church. They just wanted to go there and then go home.

As it turns out, they were there less than a month when the church almost went through a split due to a moral failure of the pastor. When the elders of the church disciplined the pastor, about half the congregation left because they were devoted to their pastor. Because of the way the situation was handled, the youth pastor and the Christian education pastor both quit, which left the church functioning without the help of any pastors at all.

Knowing that Andy taught at a Bible college, the elders asked him to fill in at the pulpit. Later they asked him to step in as the interim pastor, which is exactly what happened to Andy in California. Andy says “one of the things to look at when studying your life is to look at the same patterns recurring. If God keeps putting you over and over again in the same position, likely that’s the Spirit trying to tell you something”.

About six months after becoming the interim pastor at the beginning of 2010, Andy became the pastor of Sugar Land Bible Church. The elders agreed to limit his duties so he could keep his full-time teaching job at the Bible college.


Andy’s testimony gave me pause to ask myself “What If?”. What if Andy hadn’t agreed to teach a Bible class at his church. If he hadn’t done that, then he might never have discovered his spiritual gift. What if Andy’s best friend from high school hadn’t invited him to a Bible study where Andy learned that he needed to be born again? Andy might still be lost to this day.

The next time you’re given an opportunity to serve God, take a moment to consider what if.

I truly appreciate the wealth of videos and other training materials that Andy provides at no cost. For example, you can get all of Andy’s sermons at www.slbc.org with PowerPoints. He’s a contributor to www.SpiritAndTruth.org and has many videos on the Andy Woods Ministry channel on YouTube that teach through books of the Bible.


This message is based on this video on YouTube.

Here are some other inspiring testimonies you may have missed: