The Centurion who believed 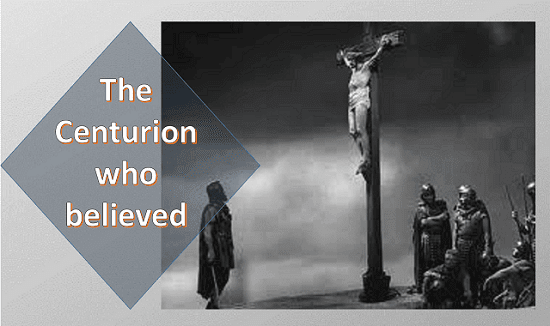 Even at his crucifixion, people came to a saving belief that Jesus is who he claimed to be, the Son of the living God. Perhaps it was Jesus' demonstration of love and grace that swayed them when Jesus cried out to His Father to not hold his death against those who were crucifying Him (Luke 23:34).

Maybe it was the way that Jesus endured the mocking of the crowds that convinced the thief who was being crucified next to Jesus to believe in Him.

In the end, even the Roman centurion and those who were with him who actually carried out the crucifixion believed.


So when the centurion and those with him, who were guarding Jesus, saw the earthquake and the things that had happened, they feared greatly, saying, “Truly this was the Son of God!”
Matthew 27:54

Like this centurion, sometimes it takes the fear of God in one’s life to bring them around to a saving faith in Jesus Christ. If you haven’t accepted Jesus as your Lord and Savior, please don’t put it off any longer. None of us can know how much time we have on this earth or how many chances we’ll have to make the decision to accept Jesus our Lord and Savior.

May God shine His face upon you, and I hope to see you in heaven,
Daniel

The Thieves on the Cross
9 Proofs that Jesus rose from the dead
He is risen, indeed
15 prophetic signs fulfilled by Jesus
Salvation